Ringette is a unique winter ice sport played primarily by females, but is open to all.

​Ringette, like hockey, is played on ice with skates, full protective equipment and sticks with six players per team on the ice at once, but Ringette uses a straight stick, a unique face mask and a hollow rubber ring.

​The objective of the game is to score on the opponent by shooting the ring into their net.  There is no intentional body contact, and the rules of ringette make it a wide-open and dynamic sport.

​The emphasis of ringette is on play-making and skating skills.  Players cannot carry the ring across the blue lines on the ice which encourages passing and team play.  Only three players from each team, plus the defending goalie, are allowed in the end zones at the same time, which keeps the play open, puts a premium on sharp offensive moves, and requires defending players to skate close to their opponents.  These features of the game demand the development of keen skating skills that give ringette players fantastic skating speed and agility.

​More About How Ringette is Played

​The game begins much like soccer with the Visiting team being awarded a Free Pass in the Centre Ice Free Pass Circle (known in Hockey or Lacrosse as Face Off Circles).  Free Passes are also ringette’s way of restarting games after penalties, violations, goals or any other stoppage of the game such as when two players from opposite teams have joint control of the ring and it becomes immovable. 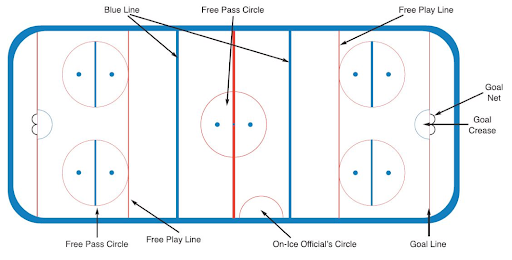 Free Passes – In ringette, these are like free kicks or throw-ins in soccer, like throw-ins in basketball or like the quick restart in lacrosse after a violation.  The ring is placed in the Free Pass circle, in the side nearest their own goal.  There is a small red dot painted on the ice for ring placement on a Free Pass.  One player takes possession and on the the whistle, has five seconds to either shoot or pass to a teammate; they must pass it completely out of the circle; they cannot skate out of the circle with the ring.  During this five seconds, no other player is allowed in the Free Pass Circle.

​Zone Play – The deep offensive and defensive zones extend from behind the goal net to the Free Play Line – the thin red line at the top of the face off circles.  Within these deep offensive and defensive zones, each team is allowed only three skaters (not including the goalie) while at full strength.  If a team has more than one penalty, they are only permitted two skaters in their deep defensive zone.  The first three players are permitted in the zone regardless of their designated position.

​Blue Line Violation – A player cannot carry the ring over a Blue Line in either direction.  The ring must be passed over the blue line to another teammate.  That teammate is permitted to skate ahead of the ring carrier and already be across the Blue Line before the ring crosses it.  This is quite different than hockey where the puck must cross the Blue Line before any offensive player does.  The requirement to pass the ring over the blue line eliminates the situation where one player can carry the ring from one end to the other end.  It also is one of the keys to ringette being such a “Team Game”.

​Goal Crease – Neither team, except the goalie, is allowed to enter the goal crease, not even by just  their stick itself.  Doing so will result in a violation and turn the ring over to the opposing team.  If the ring lands in or on the crease, the only player who can touch it is the goalie.  The goalie usually picks up the ring and throws it like a frisbee to a teammate.  The goalie has five seconds to pass it out of her crease and may also choose to hit it with her stick or skate, instead of picking it up and throwing it.

​Two Blue Line Pass – There is no icing in Ringette, but their is a two blue line pass.  When the ring crosses both blue lines, untouched, no player from the team that put it there can touch the ring until one of their opponents does first.  Touching it prematurely is a viloation that sends the ring all the way back to the zone it originally was in for a Free Pass by the non offending team.

​Penalties – Similar to hockey, penalties are called for various infractions.  Most penalties in Ringette are unintentional and are the result of accidently running into someone when attempting to get to a loose ring first; or when checking the ring carrier and missing the check on an oppontent’s stick.  Rough intentional body contact of any type is not allowed and the penalty for that is more severe.

In 1963, the late Sam Jacks of North Bay, Ontario, created the game of Ringette so that girls in his community would have a team sport to play during the winter months.  His wife, Agnes Jacks, served as the sport’s ambassador at many Ringette Championships and at international events until her death in 2005. Recently, Ringette Canada has developed an athlete scholarship that bears her name.

The sport of Ringette was introduced to Saskatchewan in 1973 by Mr. Bob Gotts of Regina, with the Ringette Association of Saskatchewan established in 1976.

​Ringette is now played across Canada and boasts a total registrations of over 30,000 players.  It is also played internationally in a number of countries around the world including Finland, Sweden, the United States, France, Slovakia, Russia, the Czech Republic and Abu Dhabi.

As with any sport, the rules that govern play can be extensive. The following is a list of the major playing rules:

How we do things

Our sport is divided into divisions based on age. Our season runs from September to April and all league games are played at the various arenas in Regina and surrounding area.  You can expect to play at least 22 league games during the season. In each game there are two periods of 15-20 minutes of stop-time play.  Most teams will have at least one game and one practice per week, and most games and practices last approximately 1 hour.  Teams consist of approximately 14-18 players.  Most teams practice during the season and attend various tournaments.  Some teams even travel out of province!

For more information about the benefits and game of ringette, visit www.ringette.rocks.