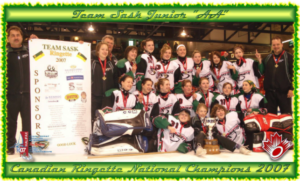 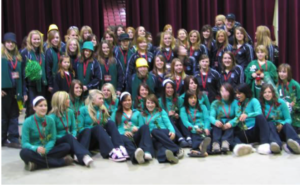 The Saskatoon Saints added 4 girls from the Regina Aces to form Team Saskatchewan in the Tween AA Division.  They finished in 4th place in their Division with a record of 2 – 3.

The Regina KAOS along with 2 players from the Saskatoon Blaze made up the Junior A Team Saskatchewan.  After 7 hard fought matches, they captured the Silver Medal in a nail-biting 2-3 game versus Calgary.  In the Junior Division Skills Competition, Chandra Berkan-Hozempa won the Fastest Skater Award and Heather Troesch was the top Goaltender in the Goalie vs Shooter Showdown.

Team Saskatchewan for the Belle A Division was the Regina RIPT who won Bronze in their Division.  Karli MacNeil won the Best Shooter Award in the Goalie vs Shooter Showdown of the Belle Division Skills Competition, while Defence, Landa Hain and Goaltender, Bailey Roddy were named to the Belle A All-Star Team.

Congratulations to the Junior A KAOS on bringing home the Silver, the Belle A RIPT on their Bronze Medal, and all our Regina competitors. 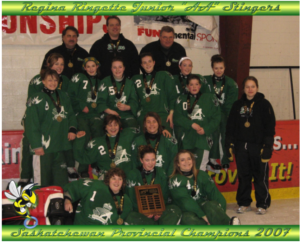 The Stingers by winning provincials now become Team Saskatchewan Junior AA and will be off to Halifax, Nova Scotia to represent our city and province at the Canadian Ringette Championships April 9 – 14, 2007. 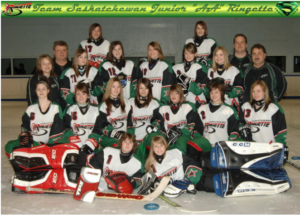 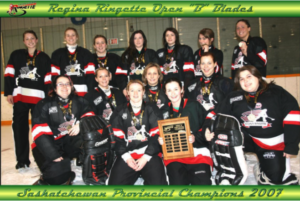 We want to congratulate our team, the Regina Blades on winning the Open B Provincial Championships that were held in Milestone. We finished the round robin part of the Championship with a record of four wins and one loss. The round robin game that we lost went twelve minutes into overtime before the Buffalo Plains Team scored to win the game. In our gold medal game against the Buffalo Plains Team we scored fourteen minutes into overtime to give us the win. Both of the overtime games were very exciting for the coaches, players and the spectators. We have had a very successful tournament season this year having won the gold medal at the Buffalo Plains Tournament, the Saskatoon City of Bridges Tournament and at the Provincial Championships. We want to thank our players for their work ethic, their friendship and for the very enjoyable year they have provided for their coaches.
Larry Way, Gary Mack & Janis Way 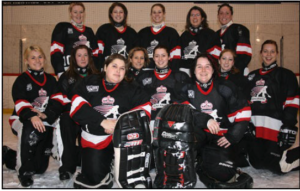 Congratulations to the Regina Blades Open Team for winning the Gold Medal in the City of Bridges Tournament in Saskatoon. We had several players that could not attend this tournament due to other commitments which made it more difficult for our team to maintain the playing intensity needed to compete at this level. Our team played very hard in all their games and they showed a lot of discipline in following the game plan for each team we played. The final game was very exciting against the Regina Shooters and we were successful in scoring the winning goal in overtime. We enjoyed the company of our players and their parents at our team supper and in our hospitality room. We want to thank all the members of the Blades Ringette Team for a very enjoyable weekend. 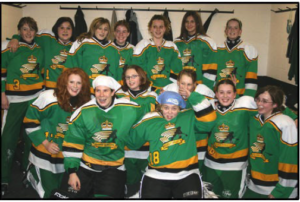 The Aces coaches want to congratulate our players on their strong performance while attending the Winnipeg Tween AA Tournament. One of our players was unable to attend and we had one of our players injured during the tournament. In spite of being short players and not being able to play with their normal line-mates, our team still managed to play very well in all the games. We won two games, tied one and lost one which tied us for third place but we didn’t advance to the medal round because we had a plus minus of +1 and the team we were tied with had a +2 rating. Our players have greatly improved their Ringette skills this year and are the most disciplined team we have ever worked with.
We have an activity for each of our bus trips to entertain our players and the activity for the Winnipeg Tournament was making bracelets and a scavenger hunt. The girls had a lot of fun on the bus and in Winnipeg, finding all the items they needed to win the scavenger hunt contest. The players went shopping, swimming and bowling during the tournament which also gave them the opportunity to collect more items. The best wildcard item for the scavenger hunt was an autographed bowling pin that one team talked the bowling alley staff into giving it to them. We are looking forward to the Provincial Championships and hopefully we will be able to attend the Westerns in Medicine Hat. We want to thank all our players and their families for a wonderful year.
Larry Way, Christine Treptau, Del Aebig, Heather Cuthbertson and Carrie Hill 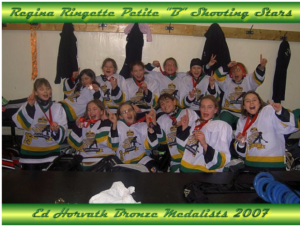 The Regina Junior Ice Caps were successful at the recent Winnipeg Transcona tournament which took place January 19-21 – winning the Gold! 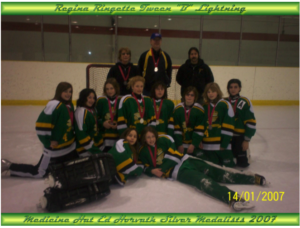 Congratulations to the Regina Tween Lightning  team on their silver medal, won at the Ed Horvath Memorial Tournament in Medicine Hat.

The Lightning went thru the tournament undefeated until the final where Medicine Hat broke a 5 – 5 tie with 38 seconds left in the game to capture the win.

The coaches and parents are very proud of the girls performance. 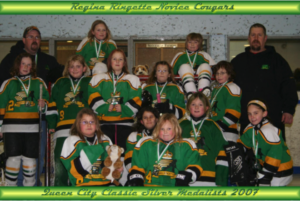 Once again the Cougars have done it.   They played hard, had fun, and  after playing 7 games in 3 days – winning 5 games they are once again wearing a pretty nice piece around their necks.

Congratulations you all deserve every bit of glory for your big win!

The team, parents, and fans in the stands would all like to send out a big THANK-YOU to all who were involved with the Queen City Classic Tournament – without you all none of this would or could happen.  The weekend was GREAT!!!!!! 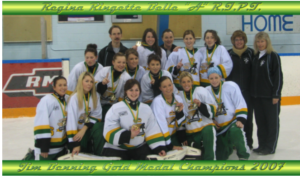 The Belle A RIPT players should be very proud of their Gold Medal win at the Regina Jim Benning Tournament.

All players gave 100% and were undefeated in the Round Robin.  They were successful in coming together with strong TEAM play.  Thanks to all the girls for making this a great year so far.  We know we are building toward provincials and your coaches and parents are all confident we will get to see you GO FOR GOLD at the WCRC’s!

Thanks to all the parents/family/friends for all their support and cheering and a special thank-you to the Boyacheks for having all the players and families to your house for a pizza night and the celebration after the win in the gold medal game. 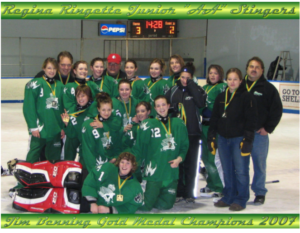 The Junior “AA” Stingers went undefeated during the round robin and beat the Calgary Epic 3 – 2 in overtime to win the Gold medal in the Jim Benning Invitational Tournament. 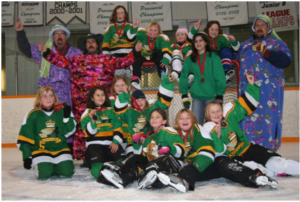 Hands Down To The Novice Division Cougars who were undefeated in all 5 games played awarding the girls with the Gold Medal in the Buffalo Plains Tournament – December 2006.

Thanks to our Coach (Joe Bote) and assistant coaches (Mel Skiehar and Lorne Shiels) for some of the motivation behind our huge win at the tournament and to all the people who shouted and cheered in the stands.  “It’s amazing how what you wear really can set the mood and make a difference!”

FUN WAS HAD BY ALL!! 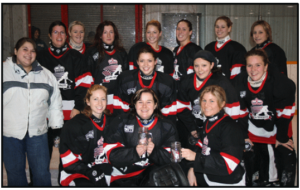 This year’s Blades team has seven players who have not played Ringette for several years so in our first few games in the league it was difficult to see the players on the ice because there was so much rust in the air. We entered this tournament primarily to get some more ice time for our rusty players and for the players to get to know and to get used to playing together. Our team came together very well and worked very hard as a team to improve their play and their team harmony. To win this tournament was just an unexpected bonus for our team and it will certainly increase our confidence as a team. We wish to thank Trina Buchanan for scheduling our Friday games after 6:00 PM so all my players could attend and for organizing and running an excellent tournament. The Blades coaches are looking forward to spending more time with this super group of ladies. 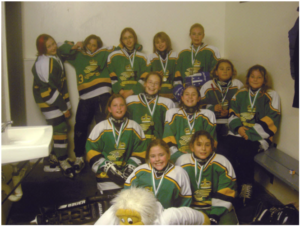 We had a great day in Odessa on Sun, Nov 26 with 4 teams participating in the Shooting Stars Petite Tournament.

Thank you to all players, parents, and coaches that came out and supported the girls! 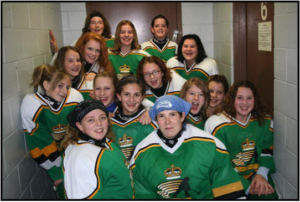 The Aces coaches want to congratulate our players on their strong performance while attending their first Tween AA tournament in Saskatoon. Only two of our fifteen players have had AA playing experience prior to this year as compared to some of the teams we played where all their players would have three to six years of A/AA experience. It is a big jump from playing Petite B/Tween B to playing at the Tween AA level for our players but they are responding well to the challenge. We got off to a poor start against the Calgary team but we came back to outscore them in the second period. In our other three games we stayed within one goal of all three teams and we out scored each of these teams in the second period. This year’s Aces team is very enjoyable to coach because they care for and respect each other, have a strong work ethic and are just a lot of fun to be with.

We also want to compliment them on how hard they worked to make the Bunny Tournament, we hosted in Odessa, a success. The players worked for twelve hours straight officiating, doing ring toss, running the raffle tables, assisting the Bunny players on ice during their games, organizing games for the Bunny players and being good will ambassadors. This Tournament was a lot of fun for the Bunny players that attended and the majority of the credit has to go to the Aces players and parents who worked hard to make it a success. We are looking forward to the rest of the season with this wonderful group of young ladies.

Four of the Novice Teams – the Cheetah Girls, the Cobras, the Angels and the Arctic Rush participated in a mini game at the Pats Dec 29th game between the 1st and 2nd period.  The whole thing went well and the girls had a lot of fun.  In total 137 Ringette players, parents, siblings and grandparents attended.