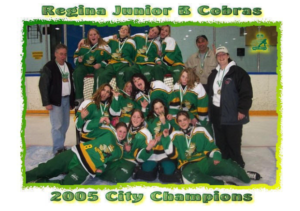 What an extremely exciting end to the 2004/2005 season in the Junior B division.

Thanks to the players and coaches of the Rush for a hard fought, fast, bronze medal game.

My hat is off to the players and coaches of the Rage… The Gold Medal Game was one of the most entertaining and heart-pounding games I have ever had the pleasure to coach. I find it truly amazing that you can shuffle all the girls and put them on three different teams and you never know from one game to the next who will win.

The battle rages until the final whistle. The girls mumble, grumble, sweat, scream & cry, yet afterwards they come out of the dressing rooms, many of them are friends again. This goes for the parents too. Not every call goes your way, nor game or even season but next year you will be back because its in your blood. It’s not just a game, it’s a LIFESTYLE.

I would like to thank all the players, coaches, volunteers, & parents involved in Ringette Regina. Without each and everyone of you, the story would not be complete.

FINALLY, I would like to thank every smiling face in the COBRAS dressing room. Our GOLD MEDAL was possible because every girl on the team truely gave 100% in the final two games. I have never seen such a team effort from our forwards to our very hardworking defence. Special Thanks goes to Melissa a rookie goalie, who simply did the job until the job was done. My favourite memory of the year was watching her jumping up and down, holding the ring in the air as the last two seconds ticked of the clock for the gold medal.

Congratulations to the Belle A Division – Regina RIPT – Silver Medalists 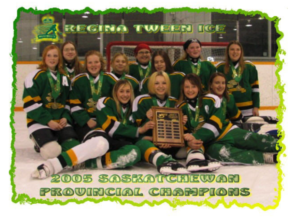 The girls have had a fantastic year thanks to their tremendous teamwork and effort.
Also, congratulations to the Silver medalists, the Regina Tween B Rage, for an excellent final medal game.

Thank you from the Ice team staff.

Five members of the Regina Riot will be representing their team when the National Ringette League hands out its annual awards during the Canadian Championships, April 11 – 16 in Winnipeg. 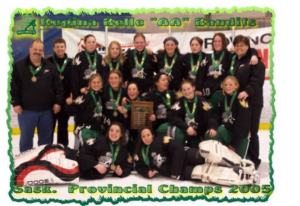 The Regina Bandits won the Belle “AA” provincial title in Saskatoon on March 5th and 6th. Regina won both of their games against Saskatoon to win the best of three series. Both games were hard fought with scores of 5-3 and 3-2. The girls worked very hard this year to accomplish this goal and look forward to a week of competition at the 2005 Canadian Ringette Championships. 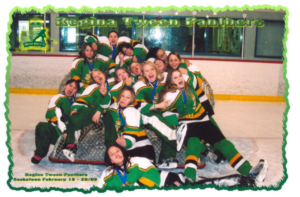 The Panthers Tween B team attended the Saskatoon City of Bridges Tournament on February 18-20. We had another wonderful weekend together as a team. The girls had the opportunity to swim, shop, eat at the Tomas Cook Restaurant, play games and go to the movies. All the girls survived the “Boogieman” movie but just barely. Our hospitality room was very active each night filled with team parents and coaches.

We are very pleased with how our team has progressed this year. Our tournament record is now 17-4 winning bronze in our first two tournaments and gold in our last two tournaments. Sometimes if coaches are very lucky they will have what we call a magical year with a team. A magical team is one where the players give 100% effort, where all the players continue to improve their skills, where the players all get along, where the team parents are totally supportive and the players are fun to be with. This year’s Panther team has all these qualities and more. This is a magical team and we wish to thank the players and teams parents for allowing us to share this magical year with them. 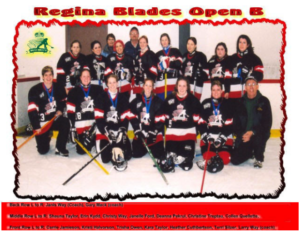 The Regina Blades Open B team attended the Saskatoon City of Bridges Tournament on February 18 – 20. We had an unusual game schedule at this tournament. playing on Friday evening at 9:00 PM, Saturday morning at 8:15 AM and on Saturday night at 9:00 PM. We certainly had lots of time in between games on Saturday. The Blades players shopped, visited friends and relatives, socialized with each other and had a team supper at the Tony Roma’s Restaurant. Only a few parents came to the tournament but they still made the hospitality room lively. The team played very well in all the games and won the silver medal.

The Blades team has been together for several years and we have coached some of the players for over ten years. Our team stays together because of the respect and friendship the coaches and players have for each other. It truly is a pleasure to be part of this team. The Blade’s team wishes to thank the players and team parents of the Panthers Tween B Team for coming out to our last two games of the tournament. We appreciated the cheering and support you gave us from the stands, it was a wonderful weekend made more so by your support. We wish to thank the Blades players for another fun year.

In the Novice Division the Regina Panthers beat the Saskatoon Ravens 12 – 7 in the Gold final.

In the Petite Division Regina teams swept the medal podium with the Regina Storm beating the Regina Flames 10 – 4 in the Gold final and the Regina Icebreakers edged the Regina Lightning 6 – 5 for the Bronze.

In the Tween Division Regina teams captured the Gold & Silver medals as the Regina Panthers beat the Regina Rage 7 – 5 in the Gold final.

The Junior Division saw Regina teams sweep the medal podium as well with the Regina Rage defeating the Regina Cobras 7 – 5 in the Gold final and the Regina Rush defeated the Saskatoon Shiver 9 – 2 in the Bronze game.

Regina Novice Panthers bring home the Gold February 18-20, 2005 in Saskatoon. The girls went undefeated in Round Robin Play and then went on to beat the Saskatoon Ravens 12 to 7 in the gold medal final!! Way to go Girls!!

The Regina Wildcats Novice Ringette team came home from Medicine Hat over the Feb. 11 weekend with the gold medal. They beat 5 teams from Alberta and advanced to the 6th game for the GOLD and beat Buffalo Plains Phantoms with a final score of 4-3. Way to go WILDCATS!

The Tween “AA” Regina Aces came home from the Winnipeg Voyageur Tournament which was held from February 11-13, 2005 with the Silver medal. They had 3 wins and 1 loss in round robin play and advanced to the Gold Final. They played the Winnipeg Magic in the Gold Final and the score was 6 – 3 in favour of the Magic.

The Aces played hard all weekend and their parents and coaches were very proud of the girls.

The Regina Belle “A” RIPT came home from the Edmonton Silver Ring Tournament which was held from February 4 – 6, 2005 with a Silver Medal. The RIPT went undefeated in round robin play with a perfect 4 & 0 record.

They played the North Calgary West KAIO and the score was 4 – 2 in favour of the KAIO. 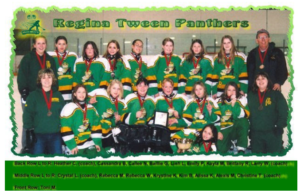 The Regina Tween Panthers win Gold at the Calgary Esso Golden Ring which was held January 21 – 23, 2005. The Panthers defeated the Sherwood Park Kaos 5 – 2 in the final.

On the way home we watched movies and slept because we did not get back to Regina until 4:30 AM.

The highlight of the trip was meeting the Canadian Ladies Olympic Hockey Team at the Father Bauer Arena. Several of the team members came to visit the Panther girls and provided them with autographs and several team pictures.

We had a wonderful weekend in Calgary and I would like to thank the Panther team parents for their awesome support of our coaching programs and the Panther girls for making this year my most enjoyable year ever in Ringette.

Thanks for the memories, Larry Way