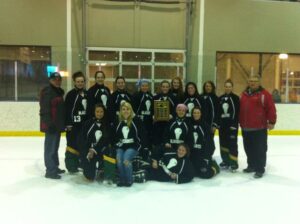 Congratulations to the 18+ Blackouts. Their regular season record was 19-1-3. They were also League Champions, Provincial Champions, and silver medalist at the Western Ringette Championships. Congratulation on one fantastic season!

From Brian Nelson and Marcel Garnier 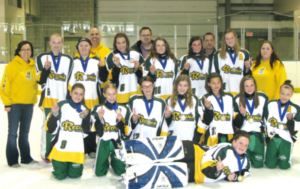 Congratulations to the Regina U14 Kaos for an outstanding 2011-2012 season. Kaos entered into 5 tournaments this season one in Manitoba and 4 locally. We also went to Provincials this season in Saskatoon as well as Regina Ringette and Buffalo Plains Ringette City finals. In every competition, 7 in total we came away with medals, which in itself is outstanding. In total Kaos came away with 5 gold medals, 1 bronze medal, a Provincial Gold and a City finals Gold. We would like to thank our team parents for their support, their friendship and for all the fun and enthusiasm they brought to this team over this awesome season. The players demonstrated a strong team spirit and great sportsmanship throughout the season. It has been a very enjoyable and fun ringette year for the Kaos coaches. I would also like to congratulate the BP Black Phantoms in their stellar performances in both the Provincial and City finals. After each final both teams and coaching staff posed for group pictures. Both teams Kaos and BP Black Phantoms have shown outstanding sportsmanship throughout the season, thank you to Both teams. 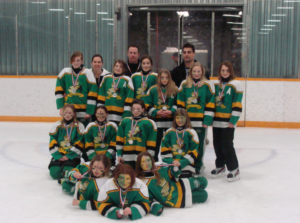 Congratulations to the U12 Regina Dynamite team for winning the Silver medal on February 12th at the Ed Horvath tournament in Medicine Hat. The girls won 5 games in a row to make it to the gold medal game where they lost to a very strong team from Cochrane. The coaches and parents are extremely proud of the girls accomplishment and their hard work. Way to go girls! 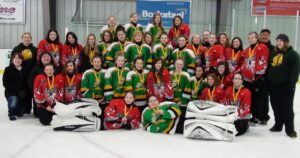 Congratulations to the Regina Cyclones team for winning the gold medal at the Manitoba Voyageur Ringette U14A Tournament. In the gold medal game the Dakota Chaos team took an early lead but the Cyclones came back strong to win the game. Both teams displayed sportsmanship on and off the ice and we were very pleased that both teams wanted to have a group picture taken. We had some bus problems, injuries and sickness at this tournament and one of our players played in a cast from a broken thumb. We believe in teaching team scoring to our players and at this tournament thirteen of our fifteen skaters scored goals and all fifteen skaters had assists. We want to thank the Cyclones team parents for their willingness to allow us to provide an extensive practice ice, dry-land and tournament schedule for our players. We also want to thank our team parents for their support, their friendship and for all the fun and enthusiasm they bring to our team. We want to compliment our players on their strong work ethic, their willingness to follow instructions and for the respectful and caring way they treat each other and their coaches. It has been a very enjoyable and fun ringette year for the Cyclones coaches. 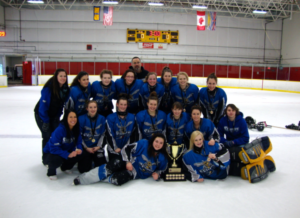 The Regina Airport was a buzz last night as the Regina Stingers U16AA ringette team returned home from Richmond,BC where they participated in the Pacific Ring AA ringette tournament. The girls fought hard against two teams from BC, one from Edmonton and one from Central Alberta in the round robin. The secured first place in the round robin with 3 wins and 1 tie sending them off with a bye to Sundays gold medal game. The girls stayed focused and fought hard to earn the 4-3 final victory over the Edmonton Elite.

We are very proud of our girls accomplishment. 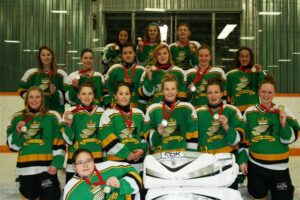 Congratulations to the Cyclones team for winning the U14A Gold Medal at the Medicine Hat Tournament. In round robin play they won three games and tied one game. In the Gold Medal game against the Medicine Hat team we won by a score of five to one. On Saturday night the girls tricked Sharon into coming into the pool area where the players promptly tossed her into the pool. Larry our head coach was given a water bottle soaking in the dressing room by the players after the final game. It was a very enjoyable weekend for all the parents, players and coaches of the Cyclones team. We want to thank Todd Rooney for doing the stats, Charlene McNeill for doing the name tags for the motel doors, Scott Fedec for timekeeping and to all the other parents that helped the team over the weekend in some way. We enjoyed the many conversations we had in the hospitality room with our team parents and we especially enjoyed spending another weekend with our fun loving and hardworking players. 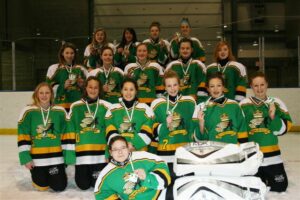 Congratulations to the Cyclones team for winning the U14A Gold Medal at the Jim Benning Tournament. In round robin play they won three games and lost one game to the St. Albert Bizzerks, the team that they would play in the gold medal final. In the gold medal final game the Cyclones players followed the game plan in a very disciplined manner throughout the whole game. It was one of the rare game situations where every player on the team stepped up and gave everything they had for their team. We are very proud to be the coaches of this hardworking, caring and respectful group of young ladies. We are looking forward to attending the Medicine Hat Tournament and spending another awesome weekend with the players and parents of the Cyclones team. 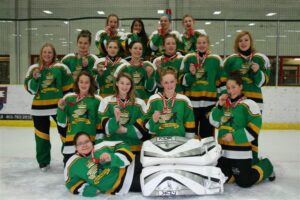 Congratulations to the Cyclones team for winning the silver medal at the Lacombe U14A Tournament. We had several of our players and coaches sick with the flu including our goalie for one game where one of our centers volunteered to play goal. We were undefeated in the four round robin games going into the gold medal final. The game required overtime and a five player shootout to determine the winner. Congratulations to the St. Albert Illusion for winning the gold. The Cyclones played every game with intensity, with discipline and with heart. The Cyclones players are a pleasure to coach because of their positive attitudes and their willingness to follow a game plan in a consistent disciplined manner. We want to thank our team parents for their support, their friendship and the great conversations we had in the hospitality room. 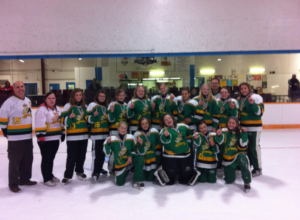 The team staff would like to congratulate the U14 Regina Kaos team for their Gold medal win on November 5th at the Midway tournament, in Davidson. The girls record for the tournament was 3 wins and a tie. We would like to thank the Saskatoon Stealers team for hosting this fun event. Congratulations! The girls worked extremely hard and worked well together as a team.