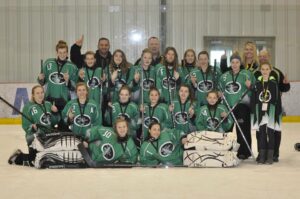 Regina Ringette team members of the U14 AA Buffalo Plains RUSH contributed significantly to the success this year in being Gold Medalists at the 2013-14 AA Western Canadian Ringette Championships, the AA Central Alberta Sting Tournament, and the 34th Annual Voyageur Tournament in Winnipeg.  Many of these players have been together for 3-4 years in an effort to be competitive among the very best teams from BC to Manitoba….and this year it paid off.  Congratulations to Alexa Butz, Sydney Muhr, Sarah Kosteniuk, Jaycee Cale, Samantha Skaar, Jasmine Johnson, Journey Masney & Danica Heerspink on being the best in your competitive age group in Western Canada!   The RUSH U14AA program prides itself on icing a strong team equally from both Regina Ringette and Buffalo Plains Associations and looks forward to tryouts next season to introduce more players to this exciting level of Ringette. 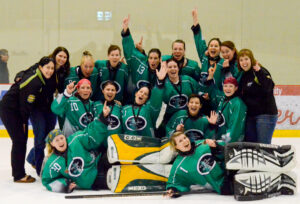 Congratulats to the Open A Jetts for winning GOLD at Westerns in Winnipeg! 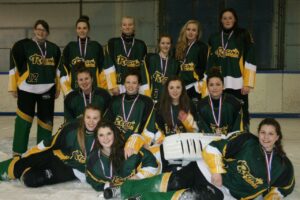 Congratulations to the Cyclones for winning the U16 League Championships and the Bronze medal at the U16 Provincial Championships. The Cyclones played in a medal game at all seven Alberta and Saskatchewan tournaments they entered winning three gold, one silver and one bronze medal. We want to thank our players for the caring and respectful way that treated each other, the officiating, their opponents and their coaches. We want to thank our players for working hard in their games, their practices and for their dedication to being team players on and off the ice. We want to thank our team parents for their awesome support of our coaching programs and for their friendship throughout the year. This was truly a dream team in every way. I want to thank the Regina Booya for their sportsmanship by joining the Cyclones for a group picture. 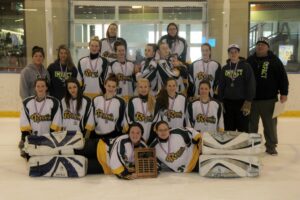 Congratulations to the players & coaches of the U16A Impact team for winning the provincial championship this weekend. The girls played their best two out of three games winning 7-1 and 3-1. The Impact will be off to Winnipeg to compete in the 2014 Western Canadian Ringette Championship at the end of March. 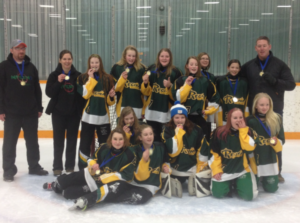 Congratulations to the U14 Inferno for winning the Gold medal at the Ed Horvath Invitation in Medicine Hat. The Inferno started the tournament out strong and united as a team and finished the round robin in first place with an undefeated record of 3 wins and a tie. Heading into the semi-finals the girls were focused and determined to go for gold! The Inferno defeated the Regina Extreme in the semi-final to advance to the final where they then defeated Calgary’s Bow View in the gold medal game to bring gold back to Regina. We are extremely proud of our girls for their strength and determination battling injury, illness, roughness, and ‘game delays’ to remain focused and committed to our team play and bringing home the GOLD! Great job INFERNO! 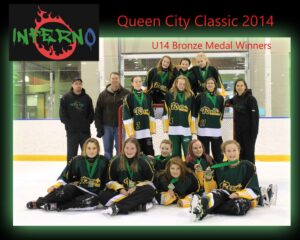 Congratulations to the U14 Inferno for winning the Bronze medal at the Queen City Classic. The girls played well, strong and united through the round robin. With consistency in their play and a solid effort by all members of the team the girls finished second in the pool. After a disappointing loss in the semi-finals to Saskatoon, the Inferno rallied to regain their game for the bronze medal game against the Regina Extreme. Both teams came out to play. After a nail biting game going back and forth, it ended in regulation time with a 6 : 6 tie. The sudden death overtime ended quickly by a top shelf beauty by Camryn McCrystal at the 30 second mark allowing the INFERNO to take Bronze! 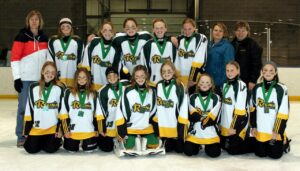 Congratulations to the U12 Lunastix for continuing their silver-lined season. The Lunastix defeated all the teams they faced through-out the QCC tournament, with one exception. The Lunastix took a 2-0 lead early in the gold medal game, but ended up earning their second silver medal this season. Congrats to coaches Tanya Jones, Andrea Weston and trainer Carmen Scott and to the rest of the girls. Way to go! 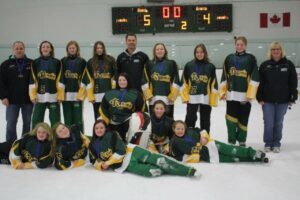 Congratulations to the U14 Regina Rebels for winning GOLD at the Saskatoon City of Bridges Tournament on the weekend of Feb. 14-16, 2014. With 4 seconds left in the game they tied the score to make it 10-10 and that’s when it all started….The Rebels were undefeated in the three reaming games to finish first in the standings and put them in the gold medal game. With hard work and determination the Rebels won GOLD with a score of 5-4 against Saskatoon Nitro to become RINGETTE CHAMPS!! A big congratulations and thank you goes out to John Foord, Brent Bernhauser, and Carla MacLeod the coaching staff, without them this would not have been possible, they keep the team together with words of encouragement and positive attitudes. A big thanks to the parents as well for getting their daughter(s) to the rinks on time and for all their cheers and support. 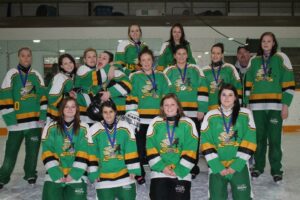 CONGRATULATIONS to the U19 Regina Blades for pulling together and winning the silver medal at the Transcona tournament in Manitoba January 17th to 19th. We had lost our goalie with about 10 minutes left in the game due to a dislocated shoulder but still managed to complete the game. 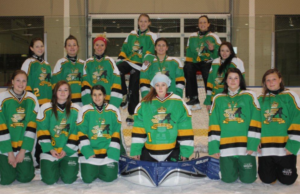 CONGRATULATIONS to the U19 Regina Blades for winning the silver medal at the Jim Benning tournament in Regina January 3rd to 4th. Hard work and some fun does pay off. 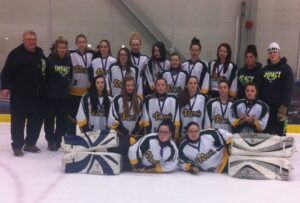 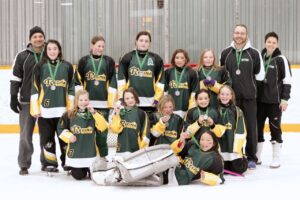 Congratulations to the Regina Rampage for winning silver in the U12C division of the Ed Horvath tournament in Medicine Hat, February 7-9, 2014. With four straight wins in the round robin and semi-final against teams from Saskatoon, Calgary, and Medicine Hat, the Rampage earned their place in the final. They played a tough game versus Saskatoon Roar which ended 4-3. Great job Rampage! Your coaches and parents are proud of you! 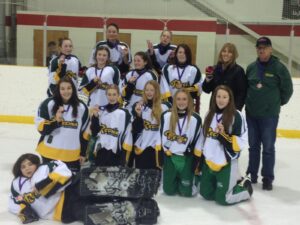 The U16B Regina Booya participated in the Ed Horvath tournament in Medicine Hat on February 7-9, 2014. After going undefeated throughout the 4 game round robin, the Booya were defeated by the fourth place team, the Regina Cyclones. The Booya then defeated the Calgary Blaze 5 to 4 in an exciting and intensely played bronze medal game. Jaidyn Puffalt with 3, Camryn Donald and Ciera Hills scored for the Booya. With only 11 skaters -– due to illness and season ending injuries to key players – and six games in less than 48 hours, Booya coaches Donald, Selinger and Puffalt were very proud to win their second bronze medal (the other being the December BP Charge tournament) after a season opening “gold” in a one day tournament in Indian Head in late November. Special thanks to the Booya bus driver, Moose Mountain Charlie, who was also presented with a bronze medallion from the Booya. 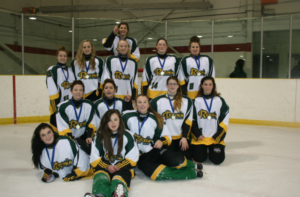 Congratulations to the Regina Cyclones for winning the gold medal at the Medicine Hat tournament. It was a tough tournament playing two 07:15 morning games, three games in one day and having 23 minute periods. They played the equivalent of over eight League games during the weekend. We also want to congratulate our players on making the medal rounds at all five of the Alberta and Saskatchewan tournaments we entered winning two gold medals and one silver medal. We lost the bronze in the last five seconds of the second period at one tournament and in over-time in another. We also want to thank our players for their hard work, their disciplined play and the awesome team harmony that the Cyclones players have created. We are looking forward to the Provincial and League Championships. 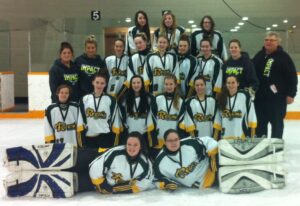 Regina Impact U16A ringette team fought a hard battle against the Dakota Rage (Winnipeg) to win 6-4 in the gold medal final at the Transcona tournament January 17-19th. The girls finished first in the round robin play, winning all three games. All matches were barn burners – 4-3 against the U14AA Angels, 5-4 over Lorrette, and after a 5-5 tie against Dakota Rage, Hannah Andreasen and Jessica Nagy each scored in the shoot out to seal their win. Jessica Kosar, Ashton Cameron Chacun & Hannah Andreasen each scored two goals in the final game on Sunday. 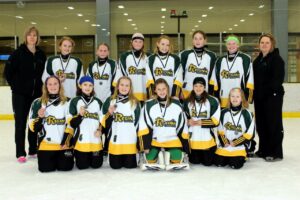 The Regina U12 ringette team, Lunastix, took the silver medal in their division this weekend in Leduc, Alberta. The Leduc Wild Thing Tournament featured tough competition with teams from Cochrane, Leduc and Saskatoon in the U12 division. 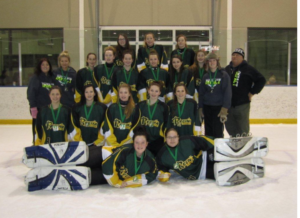 The U16A Regina Impact defeated Southdale, Manitoba 6-5 in overtime to win gold at the 2014 Jim Benning Invitational this weekend. They finished first in their pool in round robin play. Mykinna Reifferscheid, Hannah Andreasen, Ashton Cameron Chacun, Jessica Nagy and Katrina Rae each scored single goals in regulation time with Chelsea Currie marching in to score in overtime with only 43 seconds into the 20 minute sudden death period. This is the second tournament the girls have participated in this season, both ending in overtime. Congratulations girls! 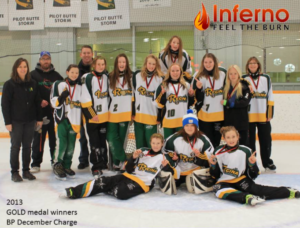 Congratulations to the U14 Inferno for winning the gold medal at the Buffalo Plains December Charge Tournament. They worked hard throughout the weekend and completed the round robin with a 3-1 record.  They finished first in their pool which allowed them to advance to the gold medal game where they defeated the BP Black Phantoms. Great job girls! 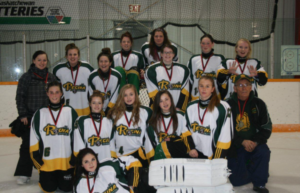 Congratulations to the 2013 U16B Cyclones for winning the gold medal at the Buffalo Plains U16B Tournament. The gold medal game against the Regina Whip was very exciting and both teams deserved to win the game by their determined and intense play. Our team was fortunate to tie the game up in the second period with only nine seconds left on the clock and to win in overtime after only twenty-two seconds. The Cyclones team played in the bronze medal game in the Lethbridge tournament and tied for first in the one day Indian Head tournament with the Regina Booya. We want to compliment our players on their strong work ethic, their willingness to follow instructions and the caring way that they treat each other and their coaches. We want to thank our team parents for their support of our coaching programs, for their friendship and for all the fun they bring to our team. Thanks for a wonderful first half of the season. 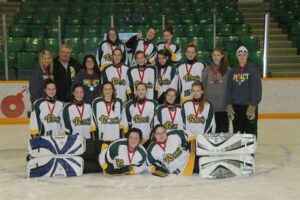 U16A Impact journeyed to Selkirk, Mb. to compete in the Rings of Steel tournament November 29-December 1, 2013. The girls played hard in their round robin pool of U16A to Open C age groups. Gold medal game Sunday morning ended in a thrilling 6-6 regulation time score with the tying goal crossing the goal line as the buzzer to end the game sounded. The girls lost gold in the shootout. Goal scorers in the gold medal game were Jessica Nagy-2, Delaney Gray-2 and Ashley Rotariu & Katrina Rae each with a single. Great start to an exciting season!