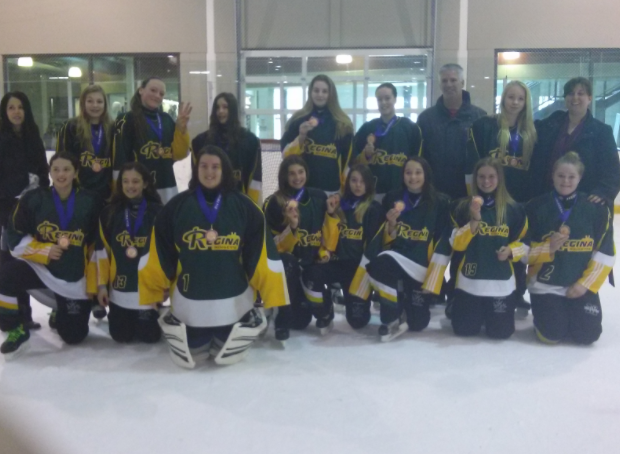 Congratulations to the U14 Inferno, Bronze medalists at the RRA/BPRA City Championships!  Way to go girls, thanks for a wonderful year. 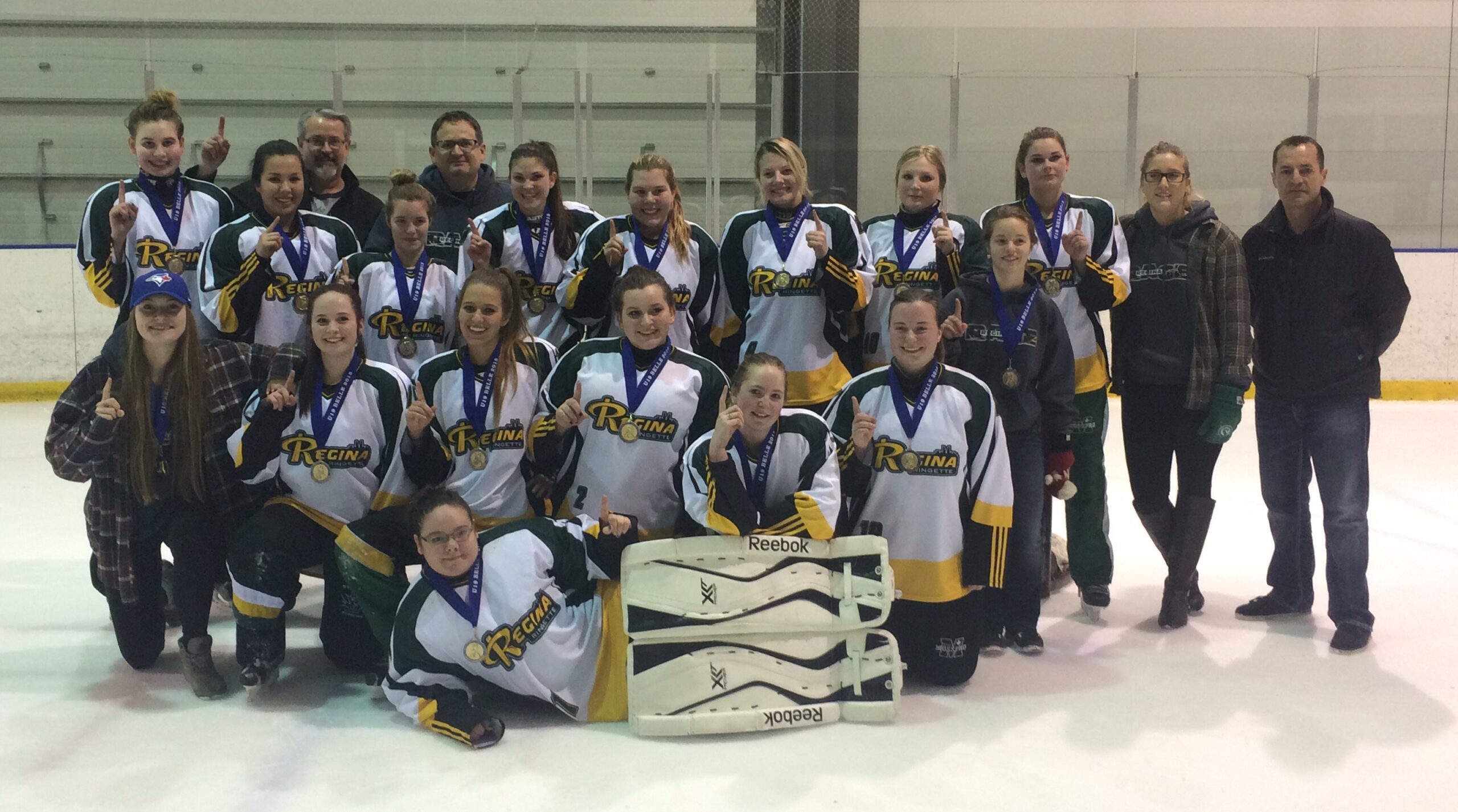 The Regina Rage won the gold medal in the under 19B division at the Regina Ringette Championships on the weekend.  The Regina Rage beat the Buffalo Plains Phantoms 3-2 in the final at the Co-operators Centre.  Scoring for the Rage was Jessica Flaman with two goals and Rebecca Borsa with one.  Brittney McNeill stopped 39 shots to help the Rage win Gold!  The Regina rage aleady won the Provincial title in March against the Saskatoon Thunder.  Congratulations ladies on a very successful season! 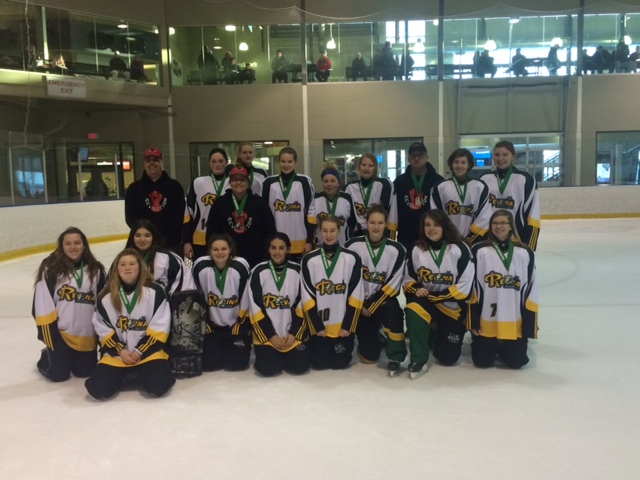 The Junior B Regina Revolution won the silver medal in the Jim Benning tournament held in Regina from January 3 to 5, 2015.  After leading the round robin event, the Revolution met the Portage Thunder in the gold medal match.  Bouncing back from a 6 to 1 defeat at the hands of the Revolution in the round robin, the Thunder won the final with a hard fought 5 to 4 victory.  Rachel Shiels, Elizabeth Degenstein, Jasmine Johnson and Camryn Donald scored for the Revolution who have now medalled gold or silver in three tournaments this season. 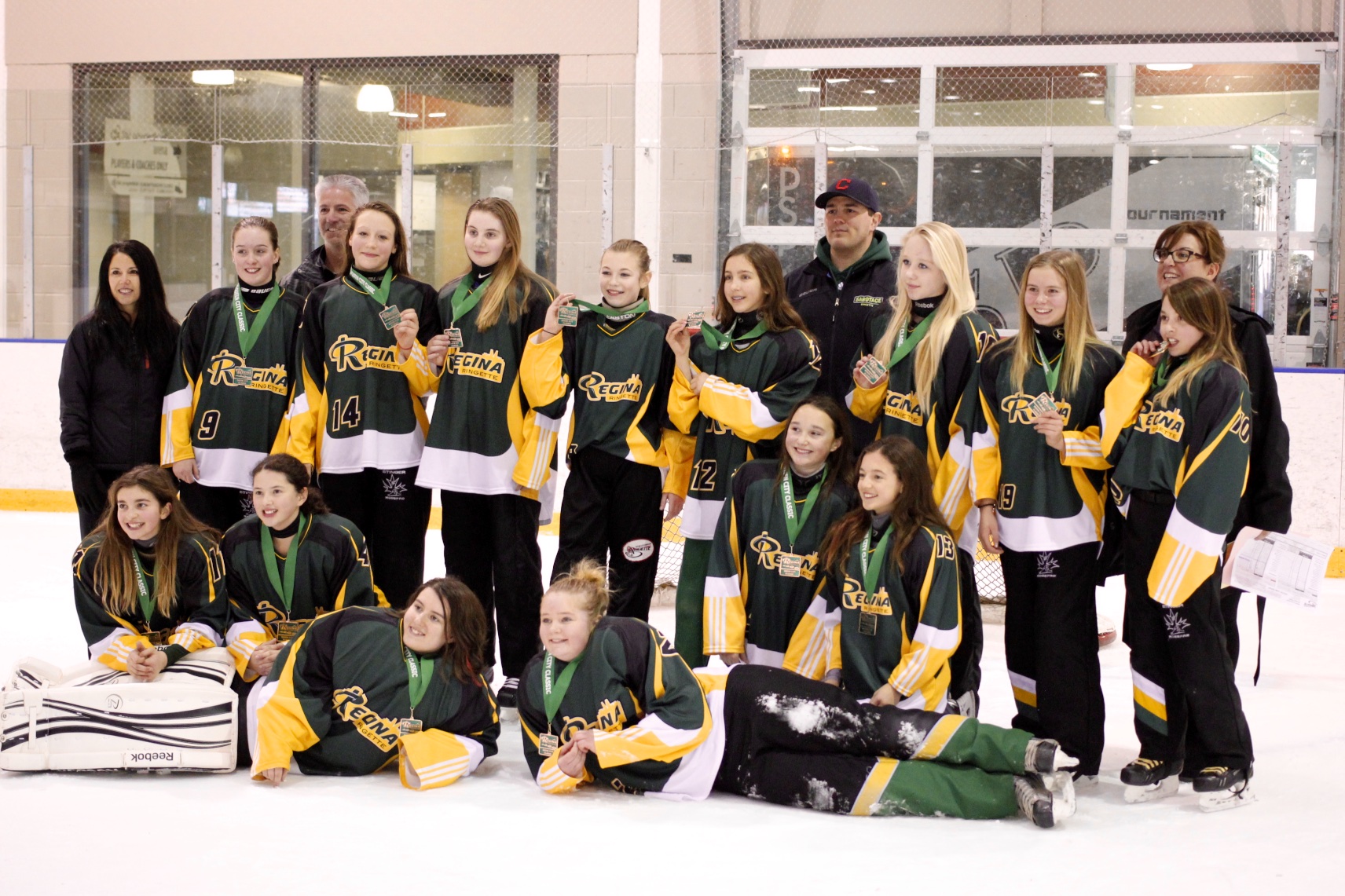 Congratulations to the U14 Inferno for capturing the bronze medal at the 2015 Queen City Classic. 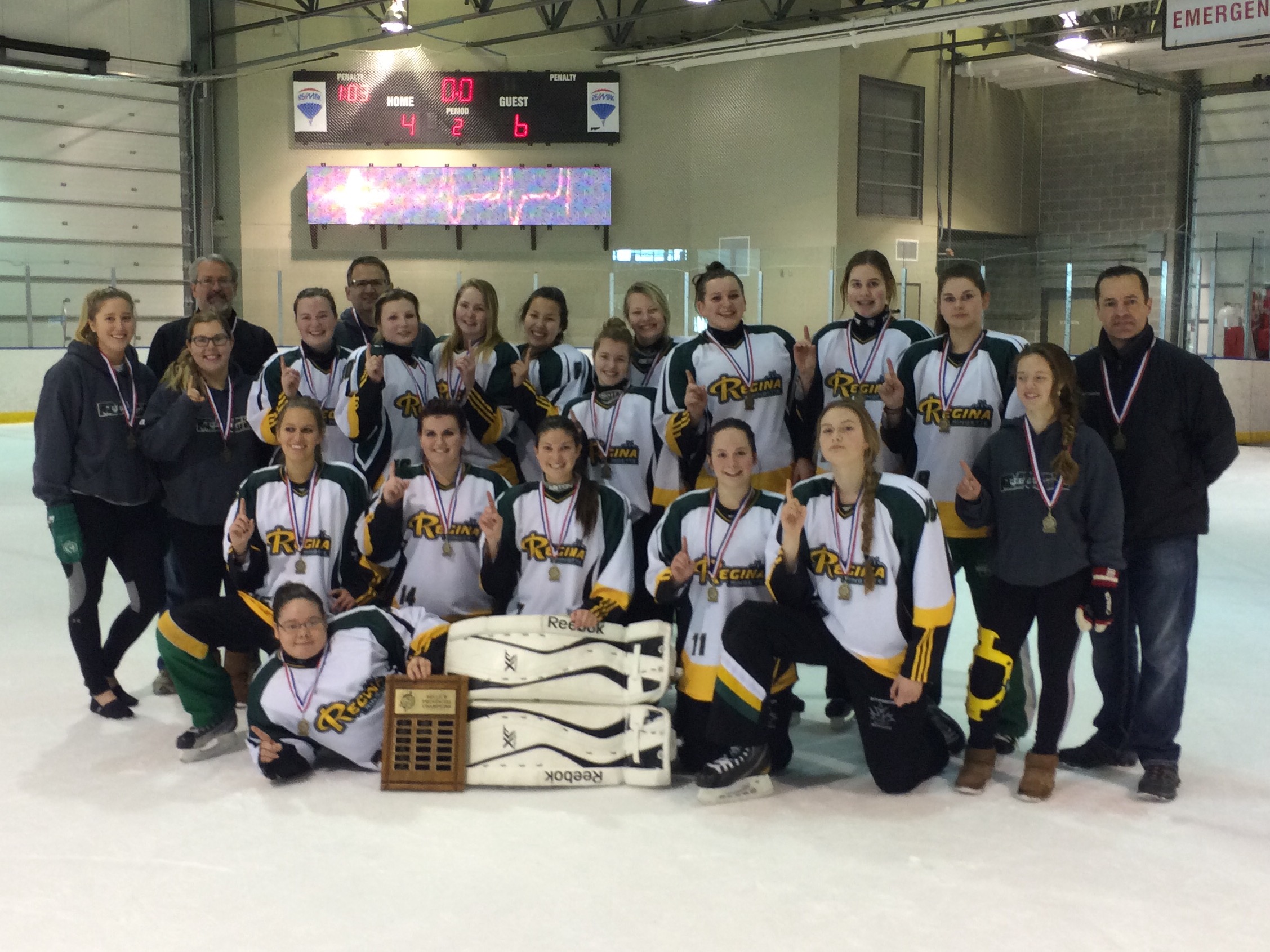 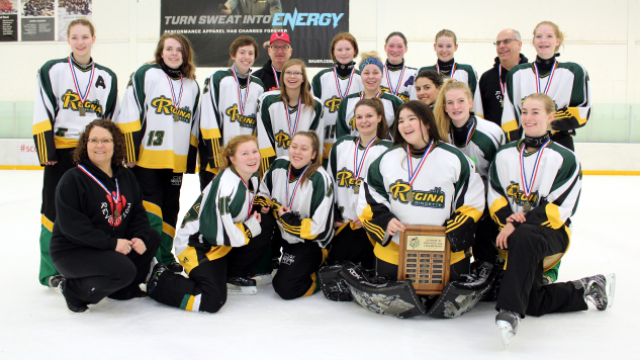 Congratulations to the U16B Regina Revolution on winning the provincial championship in Saskatoon on March 1, 2015.  After numerous tie breaking formulas went into effect after a three way tie at the top of the four game round robin, the Revolution met the Saskatoon Elite in the gold medal game.  regrouping from consecutive loses to the Elite, including the gold medal game at the BP Charge tournament, the Revolution took an early lead, built it up to a three to nothing lead and held on for an exciting 3 to 2 victory.  The Revolution were led by stong goaltending from Ashley Sandercock and goals by Cameron Bokitch, Mackenzie Moore and, with the winner, Taylor Strachan.  Coaches Sherri Johnson, Dwain Weeks and Scott Donald were proud of the team effort! 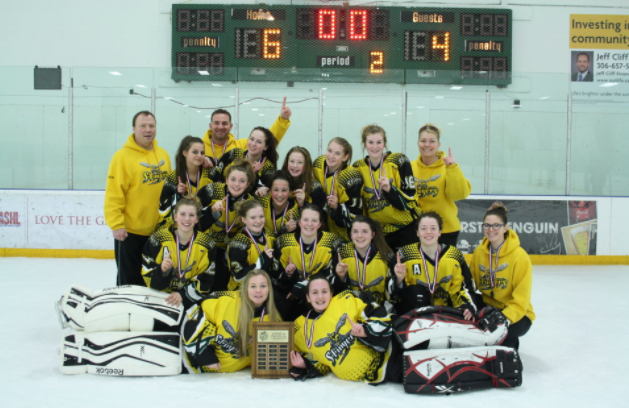 The Regina Stingers fought from behind in each of the first two games to win their best-of-three 2015 Provincial U16AA Championships against the Saskatoon Selects, 2-0.   In Game one, the Selects jumped out to a 4-1 lead after the 1st period.  Chandria Yang led the comeback with 2 goals, 2 assists and Danica Heerspink scored to tie the game with just 32 seconds left to play.  Jaycee Cale scored the OT winner just 46 seconds in to win the game 6-5.  Anna Markwart was the winning Goalie.  In Game Two, with the Selects leading 3-1 early in the 2nd period, the Stingers replied back with five straight goals, including four in the last 5:37, to win by a score of 6-4. Danielle Yeager scored two, along with Briana Hess, Danica Heerspink and Samantha Skaar into an empty net.  Goaltender Haylee Moore was the winning Goalie for the decisive game.  The Stingers will represent Saskatchewan at the Canadian Ringette Championships in Wood Buffalo, Alberta March 29th – April 4th. 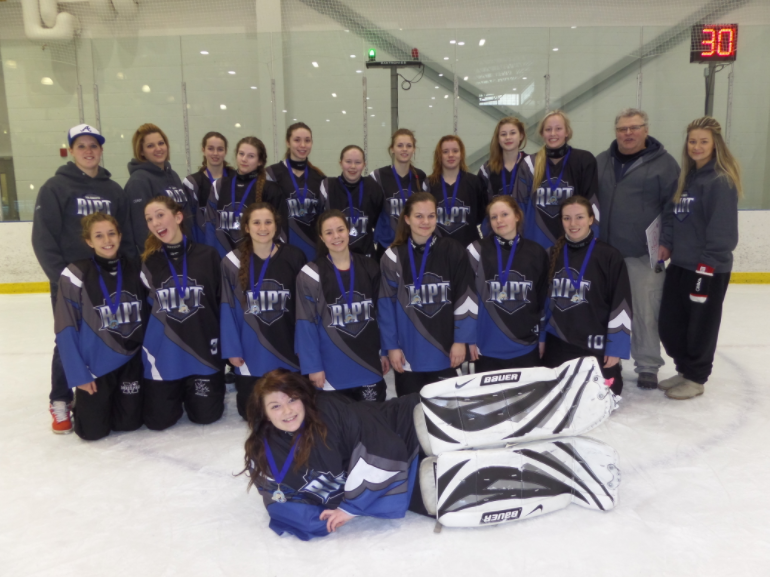 U19A RIPT win silver medal at the Edmonton Silver Ring.  The girls and coaches had a very successful weekend.  Their round robin record of 1 win, 2 ties and a loss secured them a spot in the gold medal game against the U19A Edmonton Forca.  After 46 minutes of regulation play the game was tied at 8.  We played a five minute overtime period and the teams remained tied at 8.  Coaches picked 3 shooters each and at the end of the shooout Forca had scored 2 while the RIPT scored 1.  Though the loss was a tough one, the girls played exceptional ringette the entire weekend and everyone was very proud of their performance. 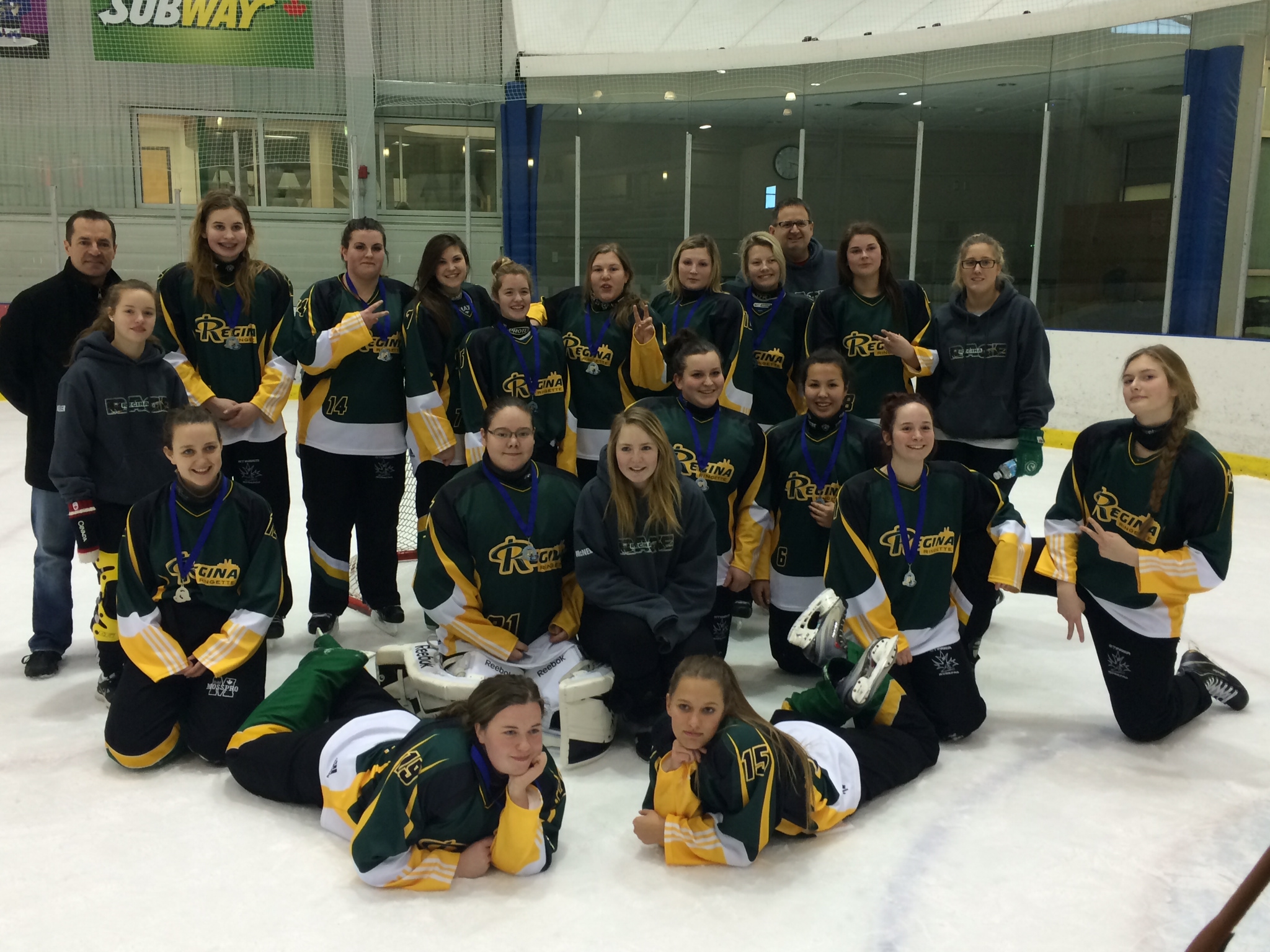 Congratulations to the U19B Regina Rage for winning the silver medal at the Edmonton Silver Ring tournament.  After winning all 4 round robin games, the Rage met St. Albert Surge in the final. 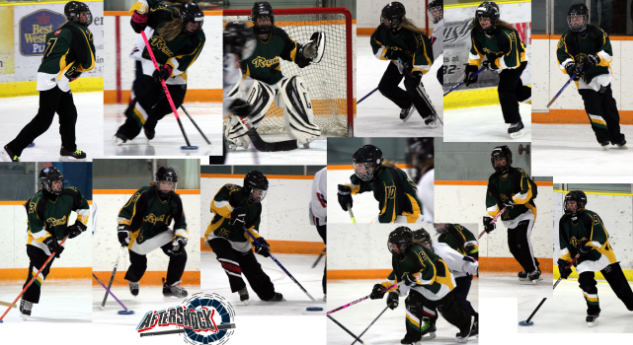 The U14 Aftershock emerged as the lone undefeated team in the Davidson mini-tournament on January 18th.  After facing defeat against the Saskatoon Cobras in an earlier Leduc, AB tournament, the Aftershock responded with a decisive 13-7 victory over the Cobras in Davidson.  Following that victory, they immediately faces the Saskatoon Hotshots.  The Aftershock pounded the Hotshots goalie with 55 shots and rebounded from an earlier deficit to win 9-8. Way to go Aftershock! 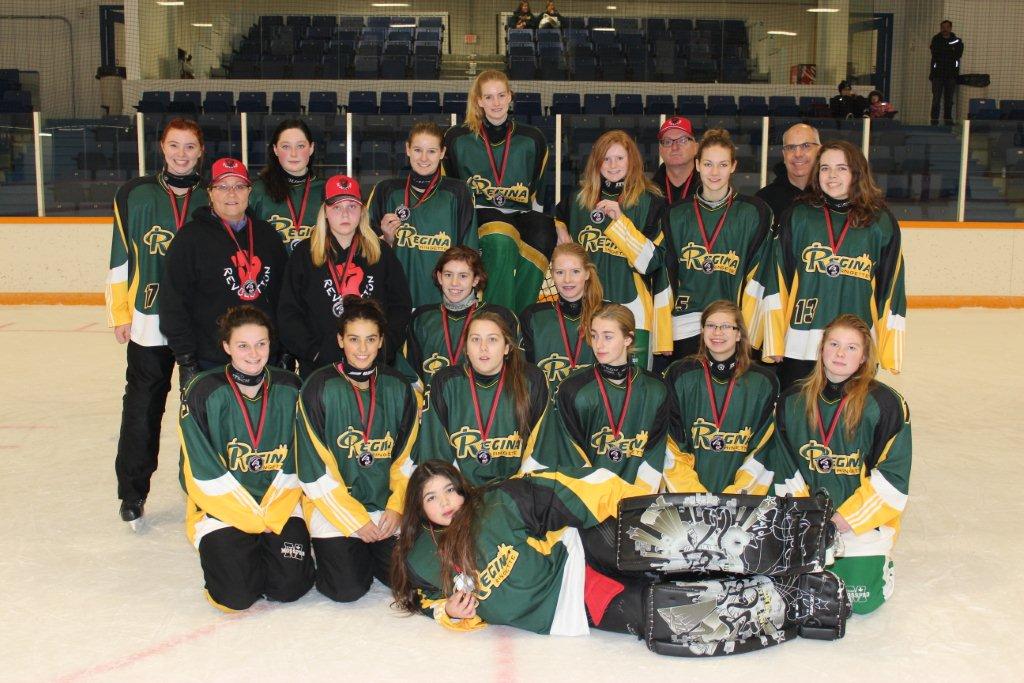 Congratulations to the Junior B Regina Revolution for their silver medal performance at the Buffalo Plains “Charge” tournament held on December 5-7, 2014.  After sailing through the round robin undefeated the Revolution came into the gold medal game on a nine game winning streak and met the Saskatoon Elite.  The Elite, bouncing back from an earlier defeat at the hands of the Revolution, scored two late goals to claw out a 4 to 3 victory and earn the gold medal in a wildly exciting game.  Camryn Donald with 2 and Jasmine Johnson scored for the Revolution.  Coaches Johnson, Weeks and Donald were proud of the effors from all the players and look forward to a rematch with the Elite in 2015. 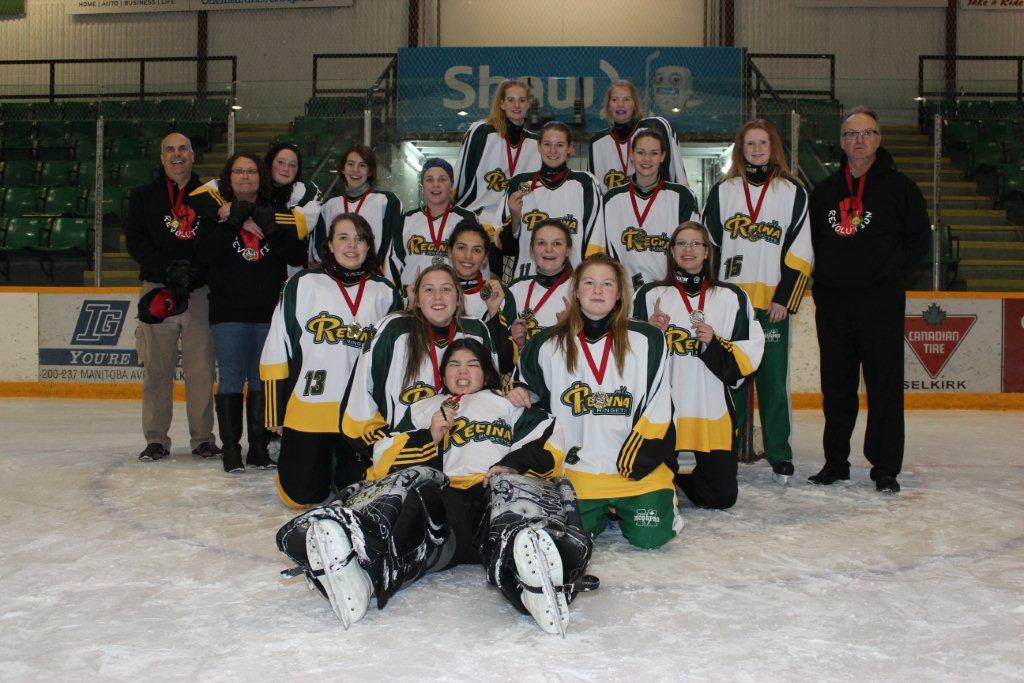 The Junior B Regina Revolution went undefeated in the Selkirk “Rings of Steel” tournament on Grey Cup weekend.  Despite issues with the bus, parents and players had a fun filled weekend.  After the 4 game round robin, the Revolution met East St Paul in the gold game.  With Ashley Sandercock’s strong goaltending leading to a shutout and goals by Camryn Donald, Rachel Shiels and Jasmine Johnson, the Revolution won the game 3 to 0 and returned to Regina wih gold medallions.  Congrats to all the players and coaches Sherri Johnson, Dwain Weeks and Scott Donald. 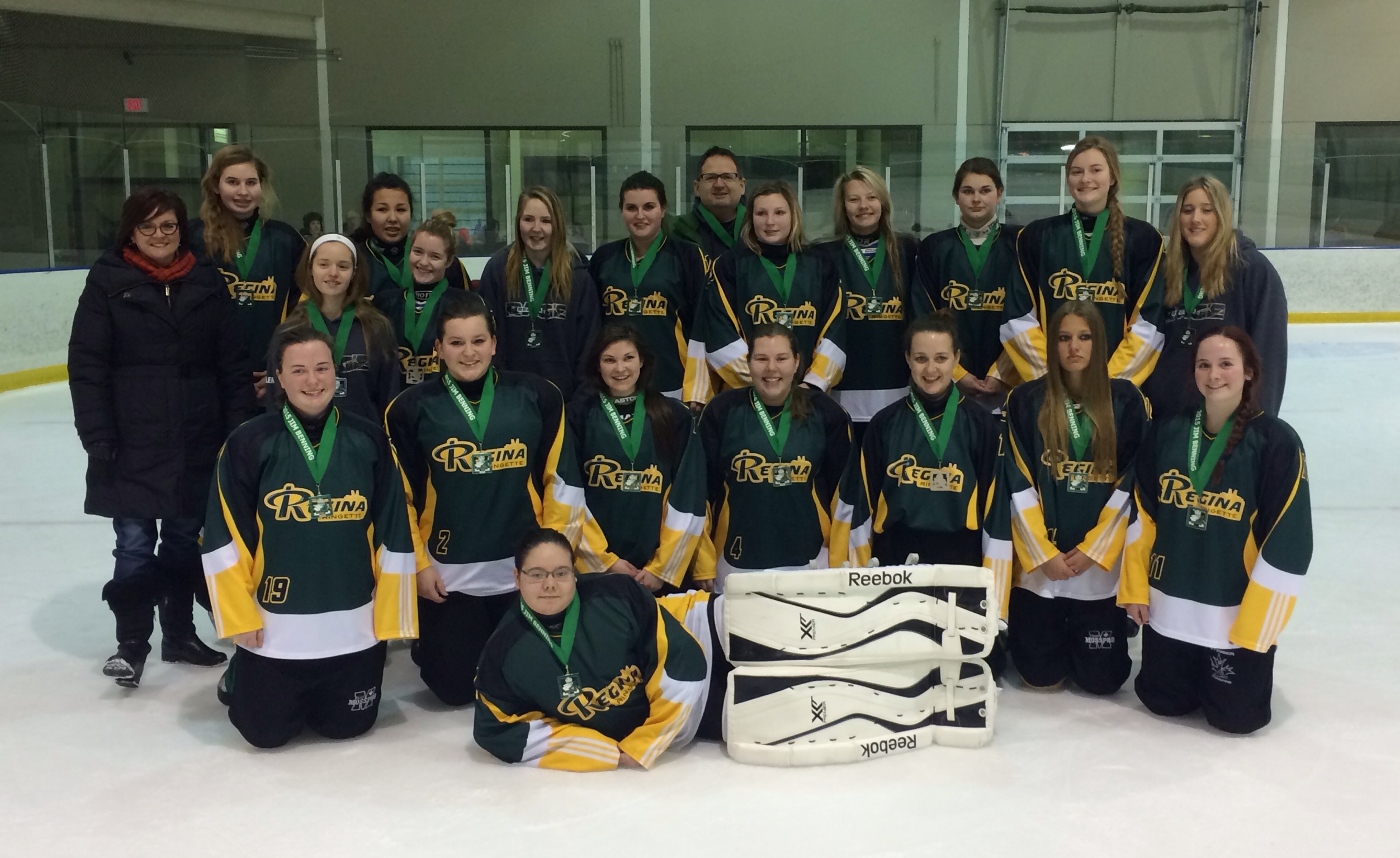 Regina Rage takes home silver in overtime at the Jim Benning tournament in an exciting game against Saskatoon!  Contratulations ladies on a great weekend! 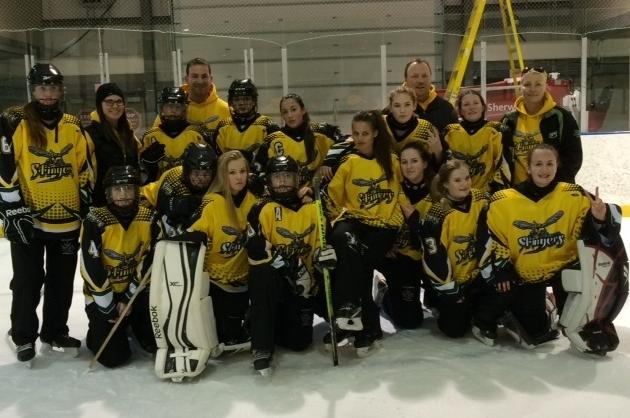 Congratulations to the U16AA Regina Stingers for winning the Silver medal at the Jim Benning Invitational in Regina.  The Stingers team compted against the U19A Regina RIPT, U19A Glenwood Rush and the 18+ Regina Edge. 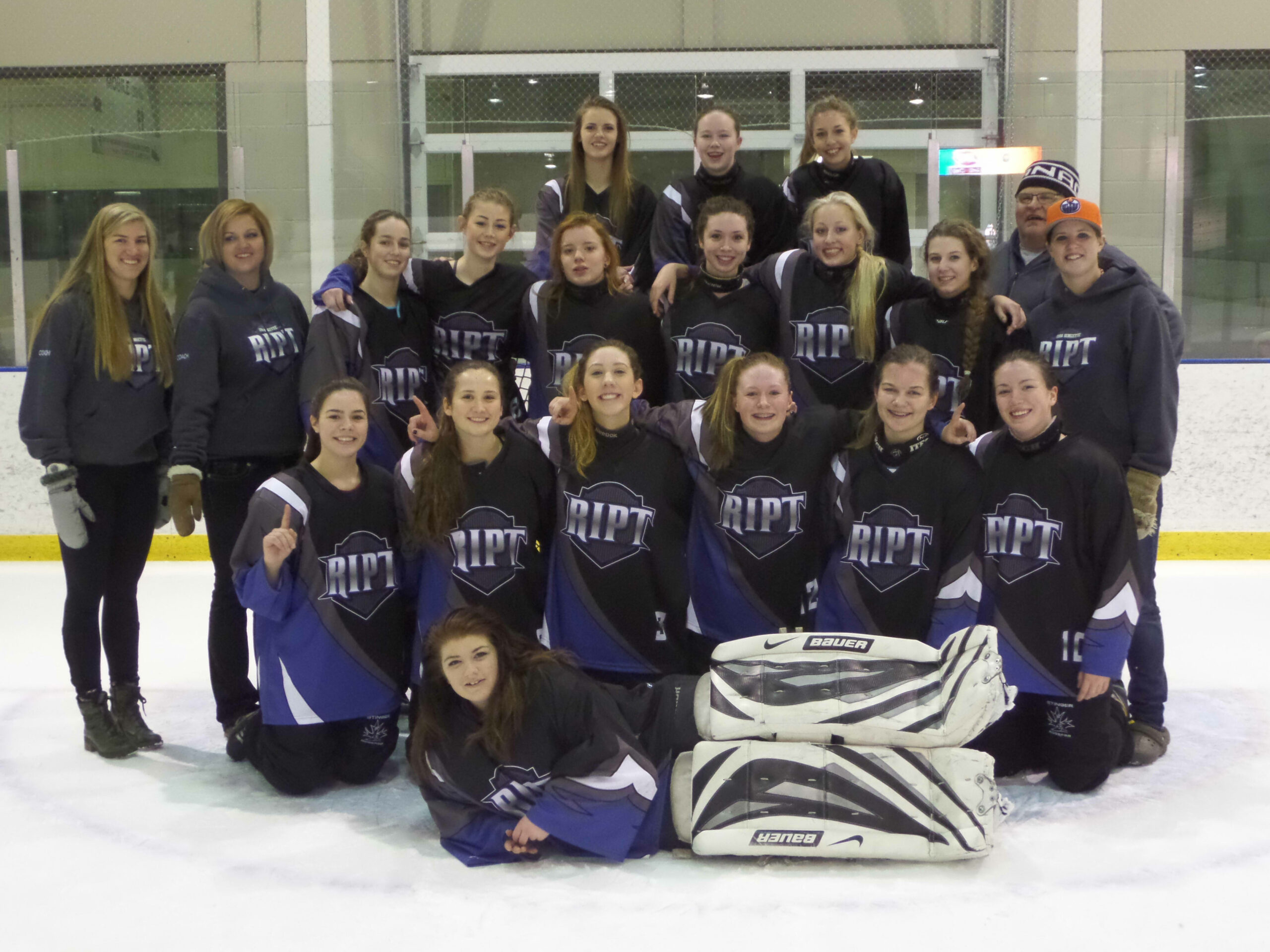 After a very successful round robin the U19A RIPT met the U16AA Stingers in the gold medal final.  After 40 minutes of fantastic ringette, the final score was 7 to 4 for the RIPT.  Thank you to both teams for a great game. 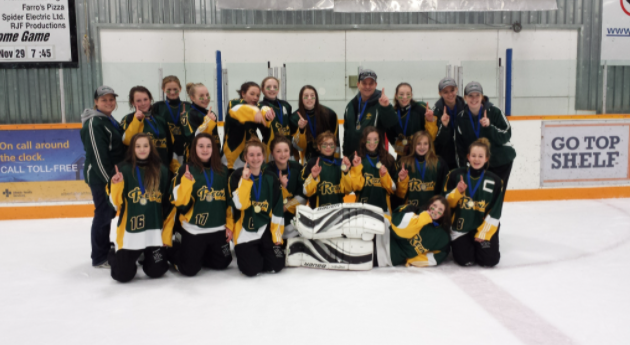 Congratulations to the U14A Ringers on their Gold Medal victory at the Ed Horvath Interprovincial Tournament December 4-6.  The team was undefeated in the tournament.