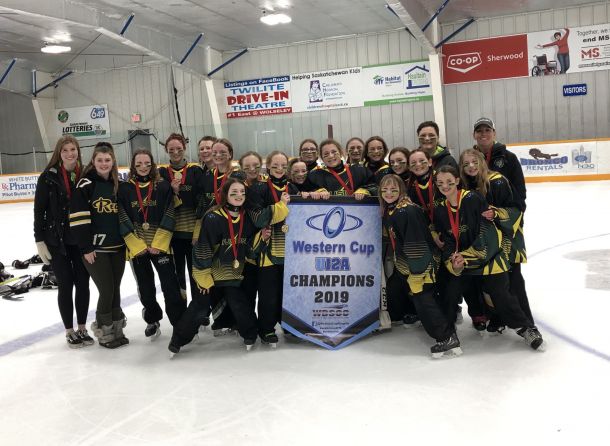 Congratulations to the U12A Fusion team on a wonderful second half of the season.  The U12A Fusion team won a silver medal at the Jim Benning tournament in January and a silver medal at the Spruce Grove Sweetheart tournament in February.  The team capped off the year by winning a well-deserved gold medal at the WBSCC Western Cup in March!  Thanks to all the Fusion girls for their hard work and focus throughout the entire year.  Big thanks to the parents for all your support and cheering.  Coach Melanie, Daina, Tara and Alexa. 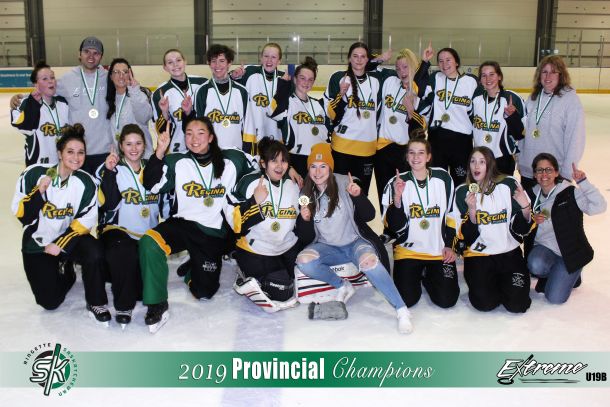 Congrats to U19B Extreme for winning the gold medal at Provincials!  Extreme lost one game during the round robin to the Buffalo Plains Riot, who they faced again in the gold medal game.  Extreme opened the game with a two-goal lead, but the Riot kept pace by tieing it up and responding back to each of Extreme’s next two goals.  Tied at 4 with 1:32 left in the game, Extreme called their time-out.  With 35 seconds left in the game, team Extreme scored the winning goal in a thrilling finish.  Congrats team Extreme on your fourth gold medal, and sixth medal of the season! 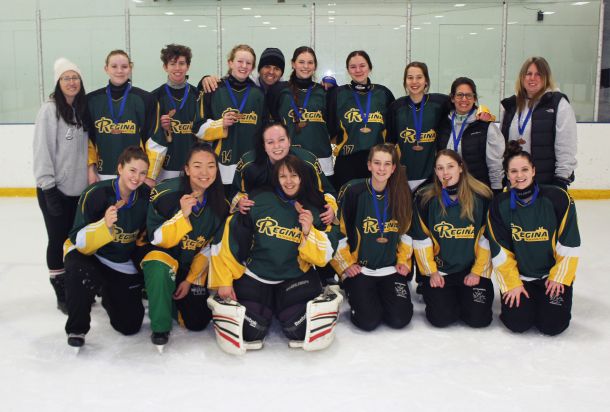 Going undefeated through-out the tournament, U19B Extreme took home their third gold medal of the season at the Saskatoon City of Bridges tournament.  In the gold medal game against the Saskatoon Royals, Extreme gave up two quick goals within the first two minutes of the game to fall 0-2.  Extreme methodically stuck to their game, never giving up another goal and scoring three in the first half, and another four in the second half to win 7-2.  Congrats team Extreme! 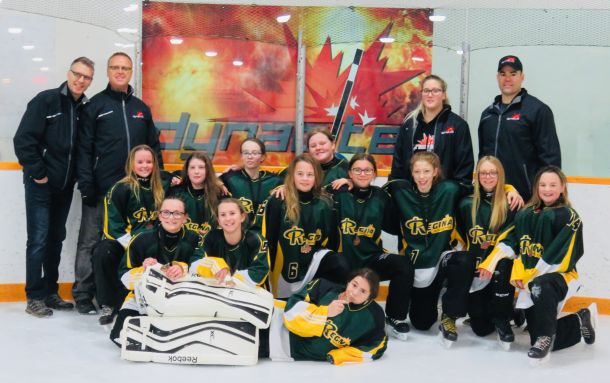 Congratulations to the U14B Dynamite for winning the Gold Medal in the 36th Annual Transcona Ringette Tournament in Winnipeg.  The team went undefeated during the round robin.  DYNAMITE faced off against Winnipeg Heritage Victoria in the gold medal game defeating them 5-2.  The girls battled hard all weekend and were rewarded for their efforts.  The best is they played as a team and won as a team! 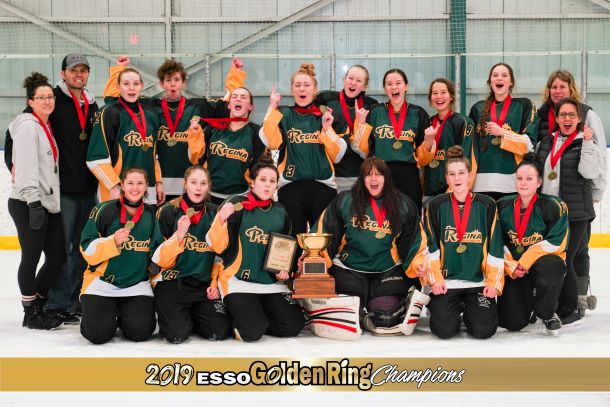 Congratulations to U19B Extreme for taking home the Gold at Calgary’s Esso Golden Ring tournament.  The tournament is the largest ringette tournament in the world.  Extreme was the only team to go undefeated in the U19B loop, mounting come-backs in every game except one.  Extreme defeated the Buffalo Plains Riot in a tight semi-final, coming back from a 1-3 deficit to win 5-4.  Extreme went on to defeat the Calgary Northwest N.A. in the gold medal game.  Fighting back from a 1-3 deficit, Extreme scored three goals in the last three and a half minutes to win 5-3.  Coaches Darren Mohr, Kindra Mohr, Tara Smith and Angela Agarand are extremely proud of the team’s never-quit attitude! 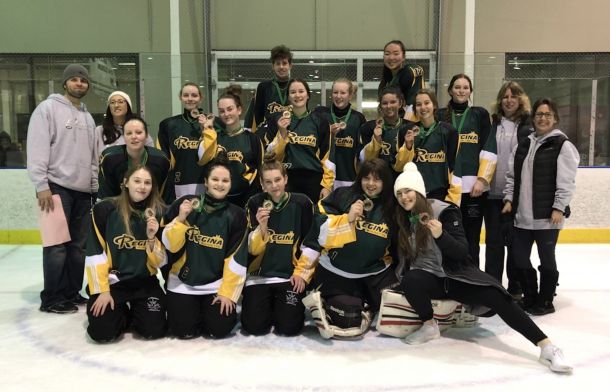 Congratulations to U19B Extreme for winning the Bronze medal at our Jim Benning Invitational tournament.  The well-organized tournament hosted a large eight-team U19B loop.  Extreme went undefeated in round robin action, falling to the Buffalo Plains Riot in the semi-final.  Extreme bounced back for the final game, taking home the Bronze medal. 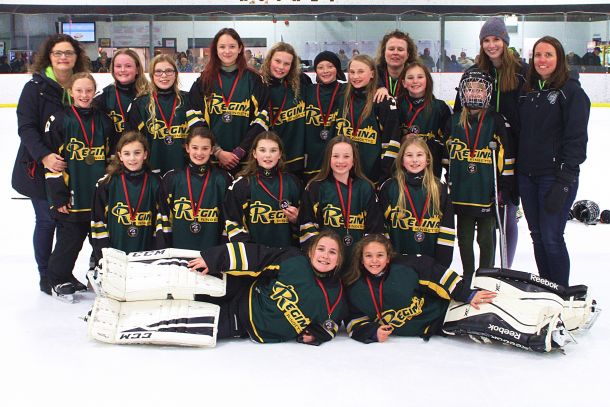 Congratulations to the U12A Fusion team on a great first half of the season.  The team went to four tournaments before Christmas (competing against teams from both Manitoba and Alberta) and only lost a total of three games.  The U12A Fusion team won a silver medal in a Winnipeg tournament in October and another silver medal in Winnipeg in December.  Thanks for all the great enthusiasm and support from the players and parents so far.  Keep up the hard work Fusion and good luck the rest of the season.  Coach Melanie, Daina, Tara and Alexa. 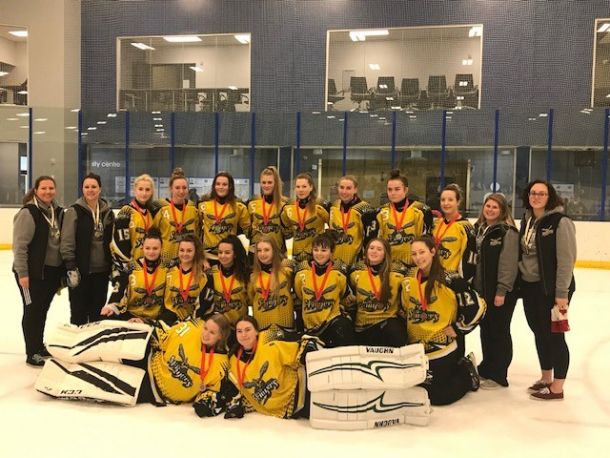 Stingers are coming home with silver after a 2-1 OT loss to the Winnipeg Magic at the Mid Canada AA tournament in Winnipeg. 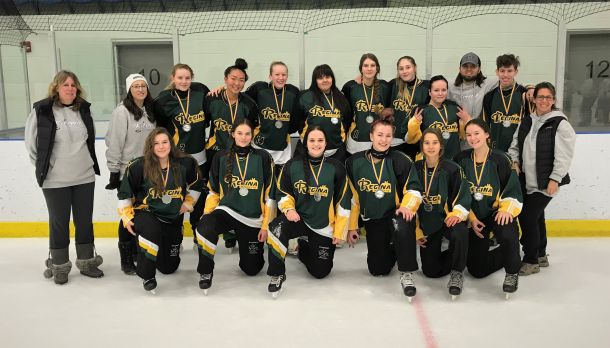 Congratulations to the U19B Extreme for taking home the Silver Medal at the Lethbridge Chinook Tournament.  The Extreme went undefeated during round robin, defeating the host Lethbridge Blaze 11-5 during the first game of round robin action.  Lethbridge bounced back, going undefeated from that point forward, and ultimately defeating Extreme in the gold medal game 3-5. 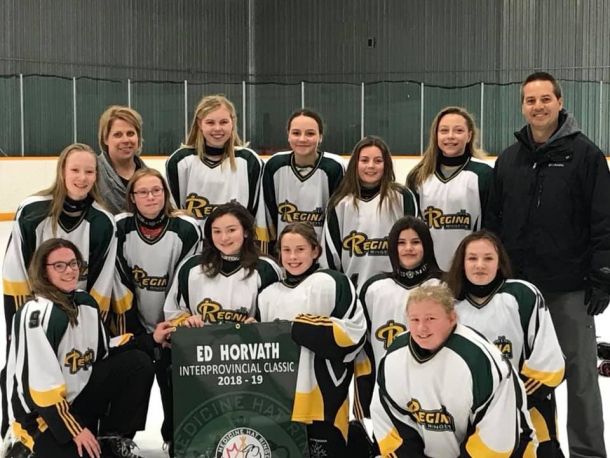 2018 Ed Horvath Tournament Medicine Hat Gold medal winners 7-1 over Northwest Calgary Fusion.  A hard battle of 5 games over the weekend to come out with a gold medal victory.  So proud of these players to dig deep and over come a loss and come back as a strong team.  Coaches Sheri Meston, Ryan Forrest, Rhonda Fleece, Victoria Palmer & Shawn Farrow. 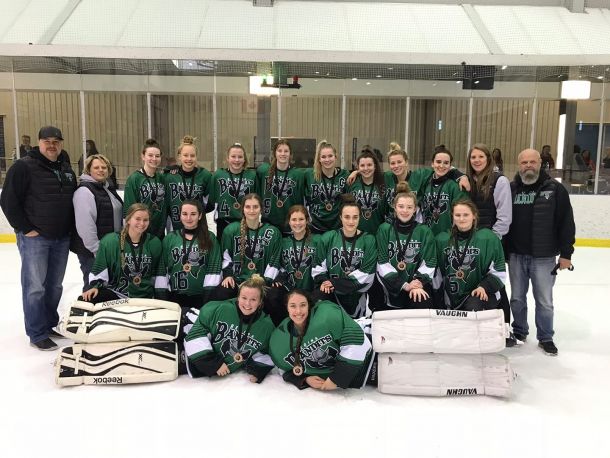 The U19AA Regina Bandits traveled to the Wood Tournament in Edmonton to test themselves against other U19AA teams from across Western Canada.  The Bandits fought their way through the round robin portion of the tournament finishing undefeated and in first place in their pool.  This set up a semi-final game against the LMRL Team from the Vancouver area which ended in a tough 403 overtime loss.  The Bandits were able to dust themselves off after that disappointment and finish the tournament in style defeating the Calgary Rush 8-6 and capturing Bonze Medals.  Congrats Bandits on a great weekend! 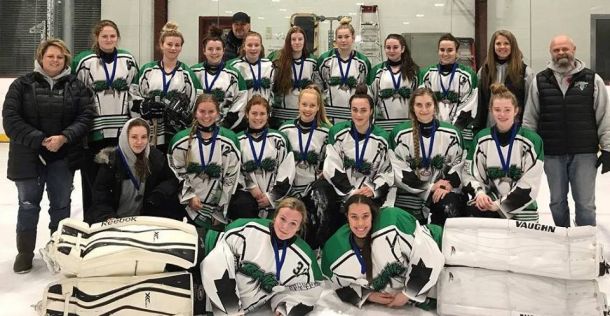 The Regina Bandits traveled to Saskatoon to attend the Bernadette Price Memorial Ringette Tournament held November 9-11.  There were a total of 8 U19AA teams in attendance from Manitoba, Saskatchewan and Alberta.  After a hard fought round robin, the Bandits qualified for the medal round.  In an exciting come from behind semi final game, they defeated the Winnipeg Magic by a score of 4-3.  They advanced to the gold medal game vs the undefeated Calgary Rogue.  The game began on November 11th at 11:00AM and as such, started appropriately with everybody in the rink participating in a moment of silence to honour and remember our military veterans.  The game began and after a proising start the Bandits found themselves behind by a score of 4-1 at half-time.  The team mounted a valiant 2nd half comeback attempt but unfortunately fell just short losing an exciting game by a score of 4-3.  Congrats on the well deserved silver medals Bandits! 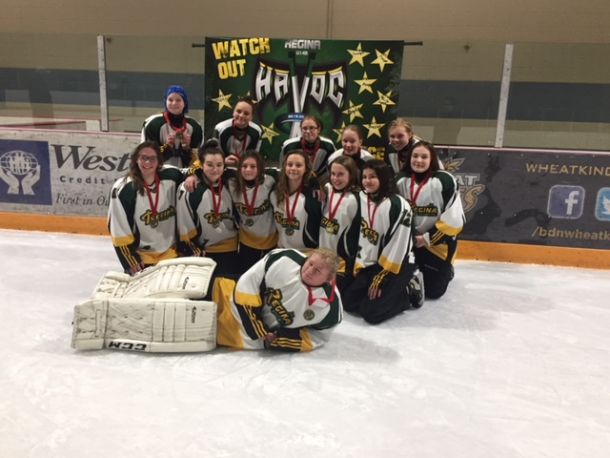 Team Havoc U14B Gold medal winners in Brandon!  Awesome weekend of Ringette ended in the final game vs BP WIld Fire.  The girls sent the game into overtime then ended with a double shootout to get the 8-7 win.  Hard game played by both teams.  Coaches Sheri Meston, Rhonda Fleece, Ryan Forrest, Shawn Farrow.