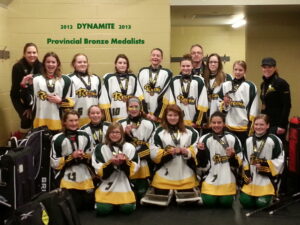 The Regina Tween B Dynamite win provincial bronze medal! After finishing second in their pool, the Dynamite battled the Saskatoon Rush in the first playoff game. It was a ‘classic’ observed long time Ringette fans. With the Dynamite down by two with three minutes to go, they battled back to tie the game with a minute left only to lose to the lead with 27 seconds to go. They then tied it up again with .1 second to go; only to lose a heartbreaker in OT. That set up a rematch with the Saskatoon Edge who dominated the Dynamite in an 8 to 3 victory in the round robin. With coaches Claude, Platt and Donald emphasizing the spirit of overcoming adversity, the battered and bruised Dynamite pulled out a 7 to 6 victory; again in sudden death overtime! 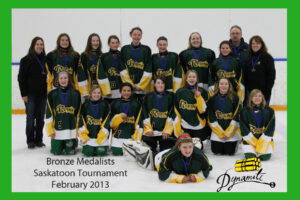 Congratulations to the Tween B Dynamite for a gutsy performance at the City of Bridges tournament in Saskatoon on February 15-17, 2013. The Dynamite opened the tournament with three victories in the Round Robin only to lose 3 to 2 to the Saskatoon Rush in Game 4. This lead to a rematch in the first playoff game and unfortunately, another one goal loss to the Rush. In what can only be described as a ‘very physical’ tournament, the Dynamite marched into the Bronze medal game with plenty of scrapes, bumps and bruises. The opposition was the Saskatoon Heat and with five minutes to go, the Dynamite were down 5 to 3…..with the coaches positively reinforcing the troops, the players dug down deep, extracted every ounce of their energy and popped in three goals to pull out a 6 to 5 victory!

The coaches – Janelle Claude, Kim Platt and Scott Donald – were extremely proud of the athletes’ efforts and team/parent camaraderie throughout the weekend. 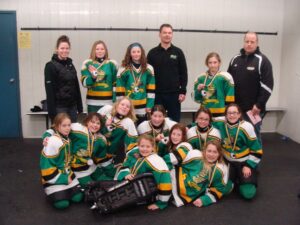 Congratulations to the U12 Rebels that attended a tournament in Stonewall Mantioba from Febraury 8th to 10th. The girls worked hard, had fun and came home with the Bronze medal. We are all very proud of your achievment. Way to go Rebels! 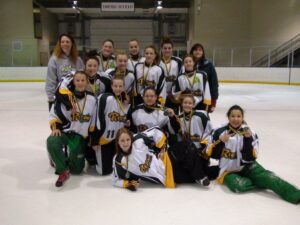 Congratulations to the U16 Fusion for taking home the silver medal at the 2013 QCC tournament! The girls got off to a slow start but came together as a dynamic team placing 3rd in their pool followed by an exciting and heart stopping 4-3 shoot out victory in the semi final. The gold medal game was exciting too! The girls worked hard and never gave up, we are very proud of all of them! Great job Fusion! 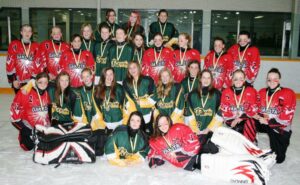 Congratulations to the Regina Cyclones for winning the Silver medal in the U14A Division at the Winnipeg Voyageur Ringette Tournament. We have three goals that we want to achieve at all of our tournaments. We want our players to have fun and to be able to shop and do other activities while they are at the tournament. We hope that none of our players are injured during the tournament and that they are able to play ringette on Sunday. We accomplished all of these goals at this tournament and we had a lot of fun in our hospitality room with the team parents. Our infamous mascot, the Cyclones goat, was present at all of our hospitality room functions. We want to congratulate the Winnipeg Dakota team on winning the gold medal and we want to thank them for wanting to have a group picture with both of our teams. We want to thank Scott Donald for looking after the stick bag and Mark Sulymka for keeping stats. We want to thank Tammy Kosar for taking video of the games, for posting the team pictures on our dressing room door and for putting up each of the player’s individual posters in the dressing room. We want to thank all the parents who time/score kept and Phillis Tymiak who is our manager. We want to thank all the team parents and our players for a wonderful year. 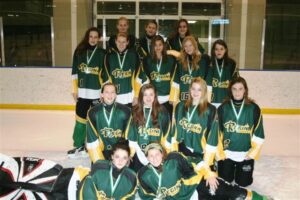 Congratulations to the Cyclones team for winning the silver medal at the Jim Benning U14A ringette tournament. The gold medal game was very exciting especially the overtime period and included a penalty shot that was stopped by our goalie. They won all their round robin games and the crossover game which put them in the gold medal final. We want to compliment our players on their strong work ethic, their willingness to follow instructions and for the caring way that they treat each other and their coaches. We want to thank our team parents for their wonderful support of our coaching program, for their friendship and for all the fun they bring to our team. It has been a very enjoyable season for the Cyclones’ coaches 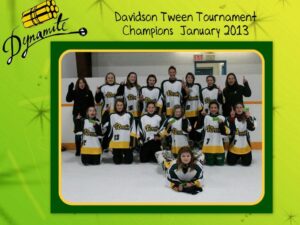 The U14 Dynamite played four games in the Round Robin and ended up in first place with a record of 3-1. Their fifth game of the day was against the Saskatoon Rush for the Gold and they ended up winning 6-5 in Overtime! After 5 games and a very long day the girls were exhausted.